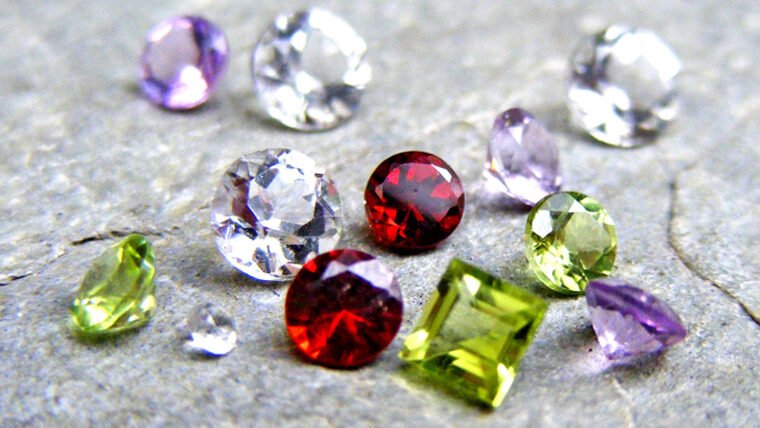 Often when buying gemstone jewellery (including from Phoenix Alchemy) you will see in the description that it is listed as the birthstone for a certain month. I love the mystical and magical connotations that wearing a particular stone will bring you luck and prosperity… it appeals to my inner elf! But I was having a conversation with someone the other day about where this tradition, and the idea of the ‘birthstones’ came from and I realised I hadn’t a clue! So I decided to take up a little research to find out about this interesting subject.

The idea of linking particular gemstones with certain months of the year is one that goes back centuries. Originally it was thought to have been associated with Christianity and religion.  The breastplate of Aaron, which was referred to in the book of exodus, was said to be a sacred breastplate worn by the High Priest of the Israelites. Worn over their holy vestments, it was used to communicate with god, and was set with 12 gemstones. Historically the number 12 had huge significance, from the 12 stones of the breastplate, to the 12 gemstones mentioned in revelation, to the signs of the zodiac, and months of the year. Stones began to begin to be assigned to particular months, with certain stones being named as ‘foundation stones’ of Christianity, and being assigned to represent different apostles. The original practice was to keep twelve stones and to wear one each month.

Numerous other traditions and myths about birthstone can also be found, although the wearing a single type of gemstone through the year that represents the month you were born in is a much more modern idea and has little to do with any of the historical or religious origins of the concept. It was really the Victorians that started to embrace the concept of birthstone jewellery as we know it today.

Over the years there has been many different versions and variations on the idea of the birthstones. It all became a little confusing, so the American national association of jewellers decided to adopt an official list in 1912. Britain’s National Association of Goldsmiths soon followed suit and created their own standardized list of birthstones in 1937. With the exception of a few minor updates and additions, these lists are still the ones we mostly use today. The modern birthstones were essentially a bit of a marketing exercise by the jewellery associations as an attempt to sell more jewellery!

Despite the slightly commercial origins behind the modern idea of birthstone jewellery it’s still a lovely thought. I’m sure that anyone who receives a gift of a piece of jewellery featuring their birthstone will love it all the same.

What are the Birthstones for each month?

For those who are interested in finding out what their birthstone is you can see the British list below:

So what does it mean when a piece of jewellery is ‘hallmarked?’ You may have seen that Phoenix Alchemy is…